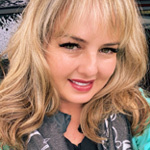 Angela Wood is a North Florida native who has lived on the Gulf Coast for more than 25 years. As a dedicated Navy spouse, she has seen the world while living on three continents.

Angela completed her initial training in esthetics at North Florida Cosmetology Institute of Tallahassee in 2005. While in Tallahassee, she also trained at The Aveda Institute.

An accomplished esthetician, she started her own business while living in Okinawa, Japan. There she honed her waxing skills including over 5 years of Brazilian waxes. After her husband retired in 2013, Angela moved back to Pensacola.

Recently she enrolled in the Advanced Esthetics program at Pensacola State College, to expand her knowledge and skill base even further. Angela is friendly, professional, and accomplished esthetician. Schedule with Angela today and see why she has had happy clients all over the world.